Further information has been published today on how businesses can claim the government’s Job Retention Bonus, with millions set to benefit from the £9 billion package. 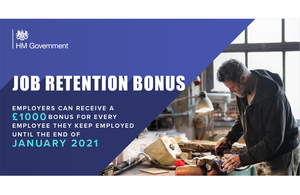 Image Copyright – HM Government
The scheme is designed to continue to support jobs through the UK’s economic recovery from coronavirus by encouraging and helping employers to retain as many employees who’ve been on furlough as possible.

New guidance sets out the information employers who have furloughed employees need to know in order to claim the bonus from 15 February until 31 March 2021.
Employers will still be able to claim even if they are receiving support from the recently announced Job Support Scheme, which will protect jobs in businesses facing lower demand over the winter months due to coronavirus.

The Job Retention Bonus is an additional boost employers can receive on top of the extensive support we’ve already put in place for businesses, including loans, grants and our new Job Support Scheme.


I know how hard employers have worked to bring furloughed staff back, and this bonus, equal to a 20% wage subsidy, will help ensure they continue to retain them.

The £1,000 Job Retention Bonus is equal to a 20% wage subsidy for the employment costs of the average person previously furloughed, but for those on lower incomes, it’s 40% of wage costs over the three-month period to the end of January 2021.

This new guidance ahead of the launch of the new Job Support Scheme. The scheme, launched by Chancellor Rishi Sunak as part of his Winter Economy Plan will run for six months and help keep employees in sectors facing reduced demand attached to the workforce.
Through the Job Support Scheme, the government will contribute towards the wages of employees who are working fewer than normal hours due to decreased demand. The scheme will be open to employers across the UK even if they have not previously used the furlough scheme.
Further guidance on the scheme will be published in due course.

Further information
Check your eligibility and find out how to apply.
This new guidance has been published ahead of the launch of the new Job Support Scheme on 1 November.
By: BID Team