Work on converting a former radio studio into high-end office space and apartments has been placed on hold after the arrival in the building of a colony of puffins.

The birds may be fibreglass rather than flesh and feathers, but they appealed to Rachel and James Murray’s passion for culture and have brought work to a standstill at their site next to Hull Marina in order to temporarily house the birds.

The 42 puffin sculptures, which stand 1.5 metres high, have been brought in from manufacturers in Poland to play a starring role in the Puffins Galore! sculpture trail. 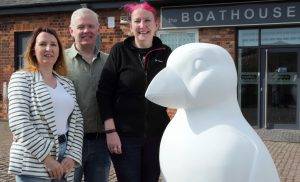 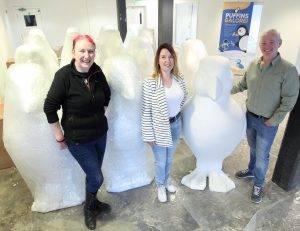 They are now being decorated by professional artists who responded to the brief of telling a story of the East Coast, its local wildlife, green energy and climate change. The painted puffins will be unveiled on Saturday 2 July at a series of coastal locations throughout East Yorkshire stretching from Flamborough down to Kilnsea, as well as some inland sites including Hull and Beverley.

Over 40 businesses have supported the project by sponsoring the puffins. They were due for delivery in March but they are made at a factory in Poland and a lot of the work came to a standstill because some of the workers are from Ukraine or have family there. So things were delayed as we prayed for their safety and waited until their colleagues could catch up with the work. All the artists and sponsors have been very understanding and sympathetic but we are now reaching the point when we can start to see the puffins in their new homes along the coast.

Puffins Galore! runs for six months after which all the sculptures will be sold, either to their sponsors or at a grand charity auction. The proceeds will be donated to four charities selected for their important role in the protection of the wildlife of the seas and coasts or their essential work saving lives at sea.

The charities are the Yorkshire Wildlife Trust, RNLI, RSPB and Hornsea Inshore Rescue.

Puffins Galore! was launched with funding from Yorkshire Coast BID and East Riding of Yorkshire Council as part of the drive to boost tourism and increase visitor numbers. That investment has already enabled the organisers to secure additional sponsorship from more than 40 businesses across the region.